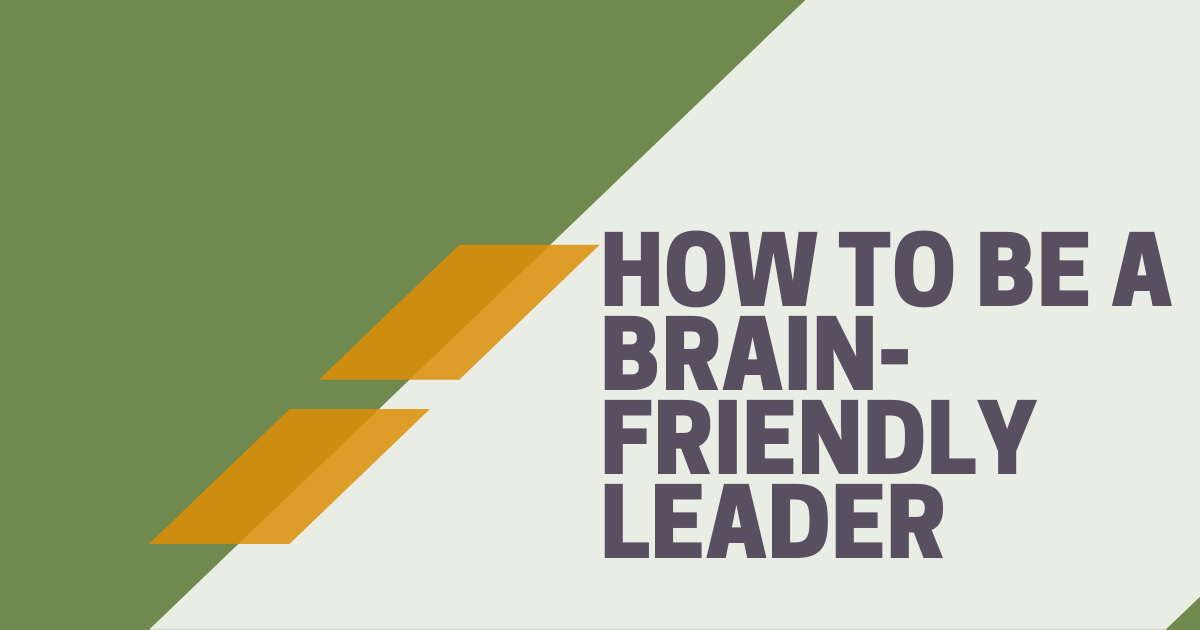 We know that work environments that recognize and support employees’ health and well-being benefit the individuals that work there. But did you know that having a mentally healthy workplace also benefits businesses in ways that can directly impact the bottom line? Absenteeism, disability, accidents, turnover, and lost productivity related to health disorders cost businesses money. Happier, healthier employees mean a more successful business.

Organizations across the world are realizing that it is good for their success to adopt healthy ways to engage, connect, and lead employees. A large part of this new focus is leading staff with a “brain-friendly” approach, often called “neuroleadership.” New breakthroughs in the field of neuroscience are helping connect the dots between human interaction and effective leadership practices. Although the research in this area is still in its infancy, new technologies have helped researchers gain an in-depth understanding of the inextricable nature of the brain, behavior, and business.

Neuroleadership is a term coined by David Rock, CEO of Results Coaching Systems, in 2006. The field of neuroleadership explores the neural basis of leadership and management practices drawing from a range of sources, including social cognitive and affective neuroscience, cognitive neuroscience, integrative neuroscience, neurobiology, and other domains within neuroscience. It is hoped that by developing science for leadership, that takes into account the physiology of the mind and the brain, it becomes more readily accessible people interested in the development and improvement of self and others.

It turns the soft skills of professional development into hard skills by looking to science. The emphasis of neuroleadership is on people rather than the management or company, and it emphasizes encouraging and supporting the health, well-being, relationships, connections, and interactions of groups and individuals.

Understanding how the brain works and its influence on personal and group dynamics, behavior, motivation, and success can help you be a more successful leader in the workplace and in your life. You can lead with a brain-friendly approach if you remember to minimize threats and maximize rewards. Leaders who understand the brain’s way of responding can more effectively engage their employees’ top talents, support collaborative teams, and create environments that foster productive change.

Our Brains See Work as a Social Group

Although a job is basically an economic transaction, where people exchange their time and labor for financial compensation, the brain experiences the workplace as a social system. The human brain is a social organ. Its physiological and neurological reactions are directly and profoundly shaped by social interaction.

People who feel betrayed or unrecognized at work, for example, when they are reprimanded by their leader, left “out-of-the-loop,” or forced to take a pay cut, experience it as a threat in their brains. Most people who work in companies learn to rationalize and subdue their brains’ natural reactions, but they also simultaneously learn to limit their commitment and engagement. They may become purely transactional employees, reluctant to give more of themselves, unmotivated, and unhappy.

To the Brain, It’s All About Threat or Reward

Below your conscious awareness, your brain scans the environment for danger, threat, or reward five times per second. This understanding comes from the work of neuroscientist Dr. Evian Gordon, who found that one of the brain’s organizing principles is to minimize danger and maximize reward. This principle is similar to the concept of the brain’s innate approach-avoid response. Basically, our brains instinctively see a stimulus as either ‘good’ (approach) or ‘bad’ (avoid) and react accordingly. This is a primitive response built into your brain from birth to ensure survival. Research shows that our brains respond in similar ways in social interactions. We approach things that are perceived as rewarding and avoid those we see as a threat.

A threat response releases cortisol and other stress-related hormones in the brain. Research shows that we react quicker, stronger, and the effect lasts longer for threats than for rewards. When threatened, our brains divert resources to deal with the threat, lessening brainpower for analytic thinking, creative insight, and problem-solving.

During a reward response, the brain responds just the opposite. It releases neurotransmitters that lead to feelings of satisfaction, pleasure, and motivation. 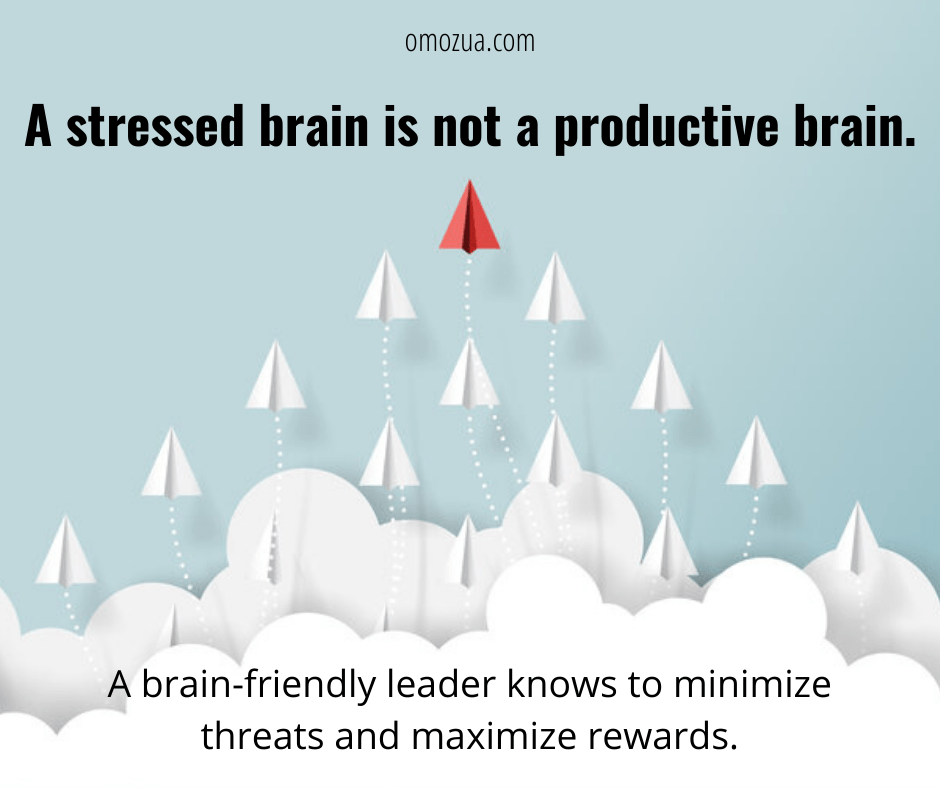 A Threatened Brain is Not a Productive Brain

The threat response is harmful to the productivity of a person or organization. Because this response uses up oxygen and glucose from the blood, they are diverted from the brain, including the working memory, which processes new information and ideas. This impairs analytic thinking, creative insight, and problem-solving. In other words, people’s sophisticated mental capabilities are not available to them when they feel threatened.

The impact of this neural dynamic is directly visible in organizations. When leaders trigger a threat response, employees’ brains become less efficient and productive. But when leaders make people feel good about themselves, clearly communicate their expectations, give employees the latitude to make decisions, support people’s efforts to perform their jobs and build good relationships, and treat them fairly, it prompts a reward response. People become more effective, more productive, more open to ideas, and more creative. They are less susceptible to burnout because they feel less stressed and more rewarded.

When leading others, you will want to keep the avoid-approach instinct in mind and aim to minimize activating the threat response. By understanding what the brain is hardwired to perceive as threats, leaders can manage and motivate in a way that minimizes any potential threat response. There are five conditions that science shows may trigger a threat response when absent. 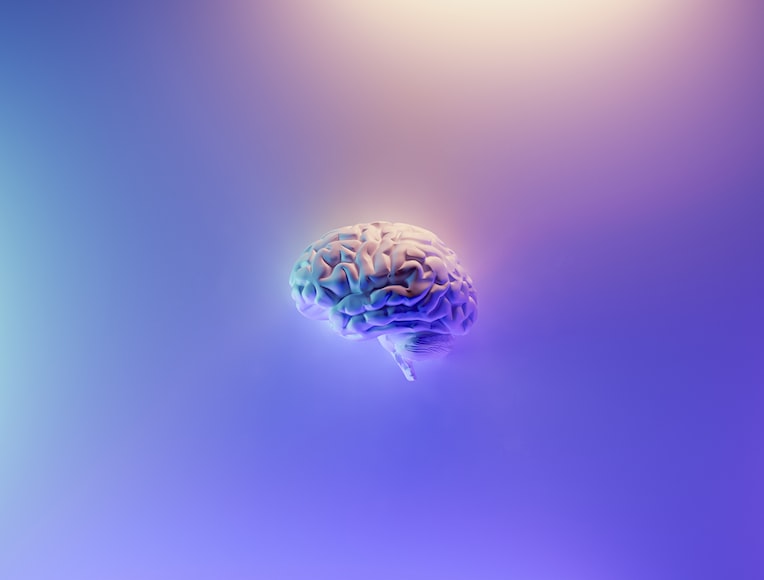 A brain-friendly approach to leadership incorporates practices that maximize rewards and help peoples’ brains feel calm, safe, motivated, and creative. They understand the brain finds many things threatening and utilize a number of tools to support others and help them move forward and perform optimally. In addition, brain-friendly leader understand that emotions are contagious and have developed effective habits to notice and manage their own threat and reward responses.

If we were observing a leader using ‘brain-friendly’ practices, we might see them:

Overall, a brain-friendly leader would lead and manage in a way that enables people to stay both physically and mentally well. A brain needs to be calm and supported to be able to manage pressure effectively, maintain productivity, and perform higher-level executive functions. This requires understanding what the brain intrinsically sees as a threat and reward. And, in turn, creating an environment where people’s brains feel rewarded, safe, and motivated. A brain-friendly leader supports growth and wellness, in both themselves and their staff within and outside of the organization.